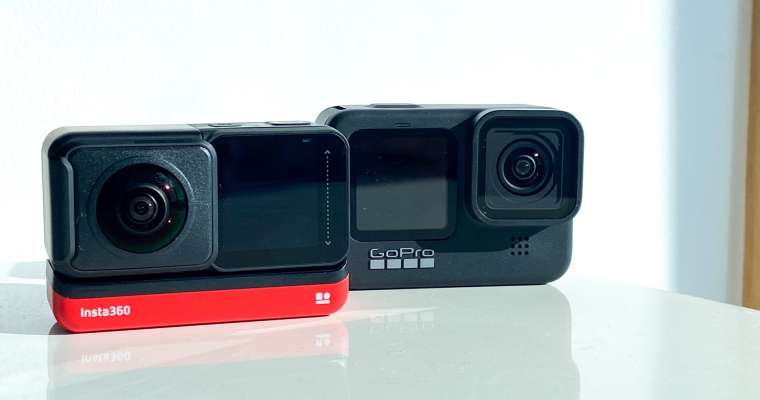 With the introduction of the new GoPro Hero 9 action camera, they made a big leap over the Hero 8 Black, and especially over the Hero 7 Black I had. It offers 5K resolution, two screens, improved color rendering, alternating lenses and a slightly better battery.

As I like to study all the gadgets, I did a little research and came across a hitherto unknown brand, Insta360, which released the latest One R model. It comes in several options: 360, twin edition, 4K and a 1 "lens module. sensor. Many classify them in the battle for the best action camera of 2020.

Obviously, the Insta360 One R allows you to change lenses depending on the things you’re shooting. While GoPro has announced Max Lens that will allow even wider image display and improved stabilization and shooting mode. I will compare the One R 360 edition with the new GoPro Hero 9 Black.

The main reason why I was interested in the 360 ​​version is that I work as a real estate agent and I saw an opportunity to learn how to do 360 tours and thus allow potential buyers to walk around the property that interests them. This whole situation with COVID-19 did not have a good effect on transit, so the process of reviewing and purchasing decisions was very difficult due to borders and tests.

But the question is which camera to get, 360 or "ordinary" GoPro. I really researched a lot, looked at reviews and read various blogs. But one thing I couldn’t “chew” and that was that GoPro grew on my heart, that the way I shot suited me better. Maybe it's just resistance to something new. I do not know. But I gave myself a chance to test both cameras.

The first thing that is newer is the principle of shooting, ie the angle at which you hold the camera towards or away from you. With 360 cameras, it doesn't matter to you since there is a lens on both sides, but the shooting angle is important precisely because of the so-called "acquisition" of images. Also, at least for me, for the 360 ​​camera, I definitely recommend the "selfie stick" stick, which becomes invisible to you until you immediately notice in the shots that one of your hands is motionless or somehow strange.

However, with 360 cameras, you can achieve newer shots, and capture the entire environment and more facial expressions, you also get more shooting angles, so that you can extract e.g. You while riding your bike, and from the same time and display the ground below you.

I don’t think I need to talk too much about the GoPro camera. Slow-motion option, hyper smooth stabilization, timelapse option, are just some of the options. Both cameras share the same way of receiving on accessories, which greatly simplifies use.

Prices range for Insta360 One R 360 edition, from 3000.00 kn to 3799.00 kn, while GoPro Hero 9 Black has just come out, all resellers have a price of 3799.00 kn. But if you are a little patient and follow the promotions that can be in the method of payment (via one of the cards, eg ZABA in Links), you can get the same for something cheaper. Of course, winter and Christmas are coming, so there will be more discounts.

Conclusion: Unfortunately you will have to decide for yourself. I couldn’t opt ​​for just one, so I saw the benefits of both. But I'm sure you won't be disappointed in the 360 ​​camera, the only thing that processing 360 photos and videos if you are not personal and patient to learn could "annoy" you. If you are not inclined to learn new things then definitely GoPro

8 Things to Know Before Buying a Drone For Photography

Dancing as the best and most beautiful physical activity!